We're about to celebrate Mayday here, when everybody used to have to parade through the street chanting “Ceau-şes-cu!!” and “Hurrah, yes, let’s do it in 4 ½!!” (The Great Conducător’s clever twist on the Stalinist 5-year plan). Many now prefer just have a bar-b-que and to play a bit of footie. But I’m a bit “old school” in believing that work should be celebrated. However, some people who claim to be hard workers are in fact the biggest slackers of all. When I worked in the health service there was a woman who spent her time carrying a piece of paper around, and if you asked her to do anything she’d say she was busy; it took 6 months before they realised she did nothing, and even then they couldn’t sack her. Dyhurr. Here are some other lazy arses who get on my tits: 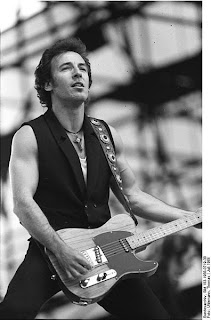 Springsteen often sings about the hard-working, blue-collar life, but does he really live up to that? Take a look at “Born in the USA”; I have, and I’ve counted more than 20 times where he sings “born in the USA", and always to the same tune – he simply can’t be bothered to think up new lines, he’s more repetitive than that Philp F*****g Glass!! He’s never done a real day’s work in his life - no wonder they call him “The Boss”. 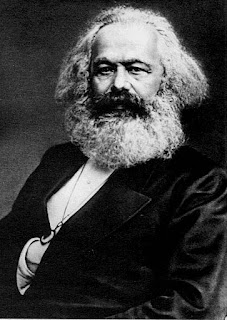 No Good Boyo has cleverly called Friedrich Engels “The Andrew Ridgeley of Communism”, but was Karl really much more of a grafter? The Communist Manifesto pretty much writes itself, I’d have thought. “Workers of the world unite”: yeah, obviously they will, and then go on strike most likely. And “International finance is doomed to collapse”, well that’s just happened hasn’t it, and that didn't take a lot of effort - so thanks for nothing, Beardy. 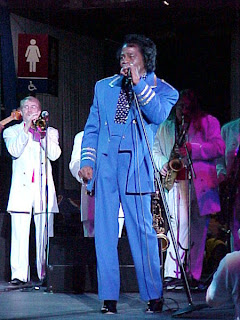 The “Hardest Working man in Show Business”, they used to call him. As I’ve said before, Soul Brother No. 1 was like a brother to me, but sometimes you even have to criticise family. He used to collapse in exhaustion on stage during every show and get one of his attendants to help him up again. That’s nothing. I collapsed 13 times when trying to do the “Mashed Potato” at aunt Doris’s Christmas party last year, and nobody bothered to help me up. He needs a bloody good haircut too. Even a bloody bad haircut would be an improvement. 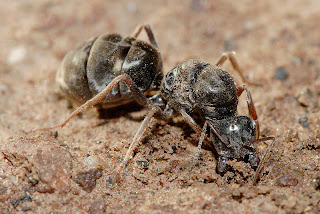 Shirker ants, more like. How hard can it be carrying a bit of leaf around?? So what if it’s 3 times your body weight, it’s still only a bit of leaf. And I know that ants make honey (that’s bees. Ed.) but so does Sainsbury’s. I’m not impressed. The queen ant on the other hand is a member of royalty and has to work hard to look composed and radiant whenever she emerges from the hive (bees again. Ed.) and I reckon she does a marvellous job, Gawd bless yer Ma’am!
Posted by Gadjo Dilo at 12:14 AM

Let's not forget the Maypole, the biggest slacker of all, rooted to the same spot while children dance around it. Do you have maypoles in Romania? Shame on you if you do.

"He’s never done a real day’s work in his life - no wonder they call him “The Boss”."But he's a devoted follower of St Barack of Honolulu, and so in favour with the liberal classes.

"but was Karl really much more of a grafter?"Marx did write the four weighty volumes of "Capital", which must have taken him a few post-prandial afternoons. It was certainly hard work reading them.

Don't you think the reverse can be true as well, Gadjo?

The sloth does a very thorough job of climbing along a branch, all the time observing health and safety guidelines ('don't climb too quickly, you might fall off'), and he gets labelled with one of the seven deadly sins. Just not fair.

In order to demonstrate the human equivalent of what an ant is doing when you see them dragging stuff around we're going to make the runner carry a double mattress across an overgrown and thistley field with lots of hedges to climb over. We'll poke him with sticks while he's trying to do this and set dogs on him.

You probably already know that the ants are taking the leaves to a place where a delicious fungus will grow on them - ants are farmers!

Good point, Bananas: like many symbolic things the maypole actually has to do very little to fulfil its function. I've never seen one here, but like most of the locals I am incapable of feeling shame.

Francis, is he a card-carrying liberal? Great, now I like him more! Did you really read those books? Hats off to you. There are many noble aspects of the communist philosophy.

Mr Gaw, I do indeed believe the reverse can be true as well. For instance, gluten does a very thorough job of sticking everything together in a loaf of bread and yet there we have another "deadly sin".

Lulu, I knew you'd give us an expert opinion on this! But shouldn't your runner chap have 1000 fellows doing the same thing with him? Things never seem so bad when you're not alone. I never knew ants made delicious fungus - so they do make honey then, kinda.

Scarley, nooo, I was merely temporarily inhabiting the persona of a very intolerant Daily Express-reading chap that I used to know. It was fun though, I'll have to say.

... we're going to make the runner carry a double mattress across an overgrown and thistley field with lots of hedges to climb over. We'll poke him with sticks while he's trying to do this and set dogs on him.
Lulu, when did you get to know Capt Scot "Scotty" Scott of the 17th Bengal Engineers?

Brilliant - there'd be 1000 young men carrying assorted mattresses, lawnmowers and ploughing attachments, they'd keep bumping into each other and fighting for control and direction of the items.


Mr Boyo, Capt Scot "Scotty" Scott of the 17th Bengal Engineers is our Manager In Charge Of Cruel And Unusual Experimentation. Was he your father?

I have one: my honors students. Unlike their lower-level classmates, the honors students are always the first to plagiarize and read Sparknotes (and have the audacity to complain about all the work they're doing as they cheat). Fortunately, I'm good with a ruler...

You need to exercise more control Gadj, there you are providing a serious treatise on the deception of hard graft and Lulu and Boyo go bounding off talking about It's A Knockout. The only link I know is the rather tenuous one that James Brown and Eddie Waring appeared together in panto in Hunslet. They should at least show their workings-out on paper so that Ana's students can plagiarise them.

Lulu, colonies of ants don't seem to have a problem. I'd just let them get on with it if I were you. (But are worker ants "male"? I suspect not.)

Ah, Ana, you have some real experience from the sharp end. Thanks for your support, and I hope you've got a fresh supply of rulers for when it's exam time again :-)

Kevin, all my serious treatises are side-tracked into something or other - maybe you've noticed - and it's usually something connected with 1970s TV programmes. James Brown and Eddie Waring appeared together in panto in Hunslet? Has Hunslet recovered?

Spandau Ballet's 'Muscle Bound' always made me wonder with its exhortation that you 'gotta work till you're musclebound all night long'. I have no desire to work that hard, certainly not during my resting hours. Indeed the members of SB didn't appear to have any discernible muscles with which to prove their case. They were indubitably lazy and feckless prancing dancing boys.

Marx and Engels' Manifesto of the Communist Party was nothing of the sort, originally, as you will know if you read my award-winning treatise. James Brown may be excused a certain amount of inactivity in the past year or so on account of being deceased for the past 18 months.

Madame, I'm totally with you on the Spandau Ballet as slackers thing - at least punk involves jumping up and down, heavy metal exercises the head banging muscles and folk music involves the effort of putting your finger in your ear.

Excellent, Daph! (Everybody, click on the link she's provided for a right good larf). James Brown's deadness gives the lie to the impression he made over the years that he was hard at work on stage. I saw Elvis the other day, he's still working, in Milton Keynes Shopping City, I'm pretty sure it was him.

You've got me bang to rights about the ants being female Gadj...

Lulu, the gender may be only nominal; I'm not convinced that any of them are particularly feminine.

Capt Scott wasn't my father, which makes me exceptional for someone born in 1962-66 in the northern hemisphere.

none of Bertie Woosters ants were particularly feminine either

Boyo, Kevin, you have both utterly confused me here, but I shall nod sagely anyway!

I would say in defence of Bruce, he does still do his three-hour plus live shows, making his live performances at least three hours longer than those by either Engels or Ridgeley.

Also, Marx did have to carry that beard around. No mean feat.

Ah, Greg, right you are. And Engels would have just stood on the stage reciting poetry while Karl played "ambient" music on an early Moog synth in the background. However, Andrew Ridgley's shorts were quite long (for shorts) and must have been a bugger to iron before every show.

Gadjo Dilo
Born in England; heart in the Carpathians.

A (Very) Select List of People I know on the Internet